“Research project 1: The diversity of microbial rhodopsins and their molecular mechanisms” 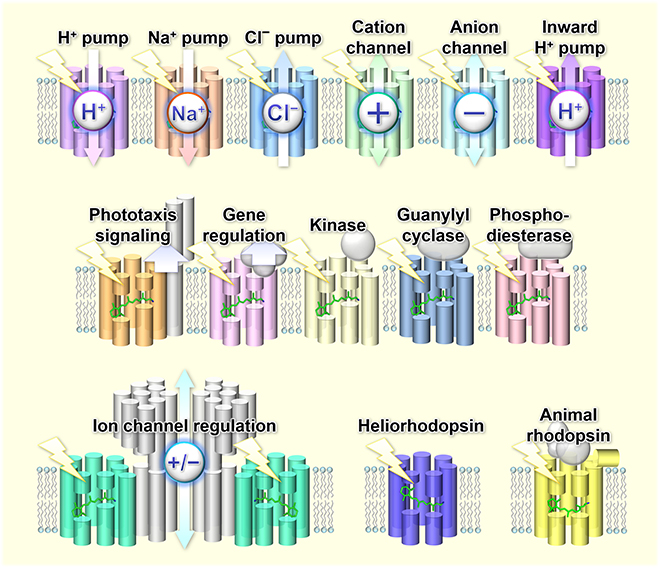 Microbial rhodopsins are photoreceptive membrane proteins present in bacteria, archaea, micro-eukaryotic organisms (algae, protozoa and fungi), and giant viruses. Although microbial rhodopsins bind retinal chromophore which is same as animal rhodopsins present in our body, their biological function is completely different. The most abundant microbial rhodopsin is light-driven outward proton pump. In this century, however, due to the recent progress on the genomic analysis technique, especially next-generation sequencers, many microbial rhodopsins having various functions have been reported in recent years: inward chloride pump, inward proton pump, outward sodium pump, phototactic sensors, light-gated cation/anion channels, light-controlled enzymes and so on. We are exploring novel functional rhodopsins from micro-organisms around the world. We are also investigating the molecular mechanism how the various functions are being achieved on the basis of common seven-transmembrane scaffold of microbial rhodopsins in which retinal bound by unifying spectroscopic analysis on molecular dynamics and structures, molecular biological techniques and bioinformatics approach. 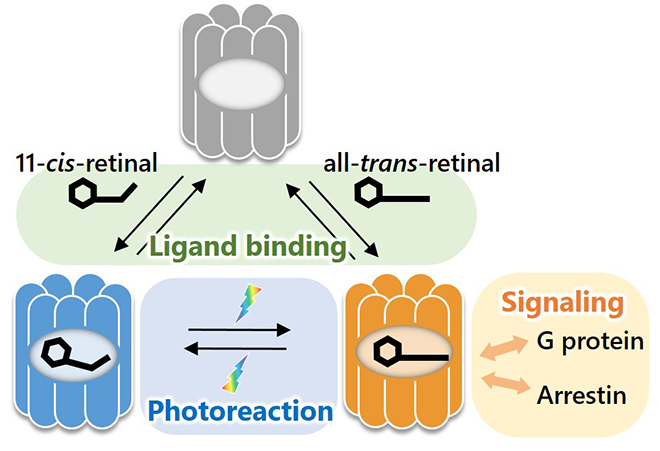 To obtain various information on natural environments, animals have evolved various photosensitive systems, including visual systems, most of which employ animal-type rhodopsins as light sensors. In visual systems, the chromophore retinal of visual rhodopsin in photoreceptor cells absorbs light and isomerizes, resulting in a conformational change of the rhodopsin and formation of its active state. Intracellular signaling proteins involved in the phototransduction cascade detect the active state of rhodopsin and cause electrical changes in the photoreceptor. Recent advances in genetic analyses have revealed numerous rhodopsin genes from various animals, which include new rhodopsins that have different properties from those of well-studied visual rhodopsins. Recently, research groups including us reported rhodopsins that have a new property of being activated before light absorption and inactivated by light. Although various properties of animal rhodopsins have been reported so far, few studies have investigated molecular mechanisms by which such differences in properties are produced. We aim to advance the understanding of the diversity and commonality of molecular mechanisms in animal rhodopsins with spectroscopic analyses on molecular dynamics and structures in combination with molecular biological techniques. 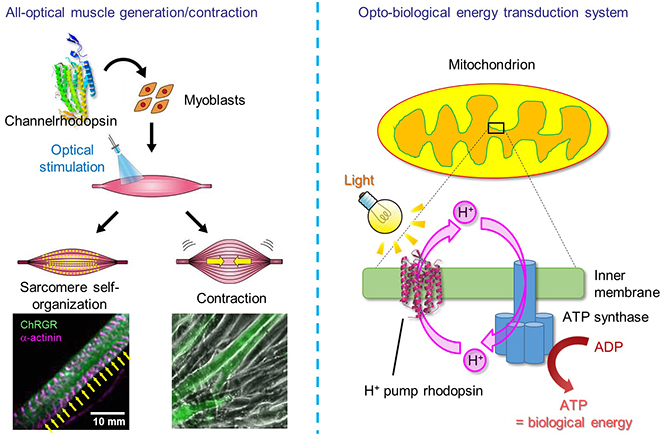 
Living organisms sense light by various means and control their behavior accordingly. For example, one of green algae, Chlamydomonas reinhardtii, uses channelrhodopsins for its light-dependent behaviors such as phototaxis. Previously we genetically engineered neurons in the mouse brain to express one of channelrhodopsins for the first time and made them to be excitable by light. Further breakthrough, which is the combination of optical manipulation/measurement of biological activities and genetic engineering technologies, is progressing under the name of optogenetics. We are aiming to apply the light-sensing proteins of various living organisms such as microbial/animal rhodopsins and their artificial variants for the next-generation optogenetics to investigate what is Life, the dynamics of materials, energy and information. We will create the organisms which are endowed with new abilities, such as an animal which can use light for its energy, to challenge the global problems such as energy crisis, starvation and climate change. Medical application of our techniques of optical manipulation of cell functions/metabolism would be prospected to solve the problems, such as cancer, aging and any incurable diseases.